Are you a WOW player worried by the recurring WOW51900319 Error? No need to worry anymore! We have an article right here for your gaming errors right here. World of Warcraft (or WOW) is one of the most popular viral games played worldwide. So, the WOW51900319 Error hits all the players worldwide and thus, is a commonly seen error by the WOW game players. 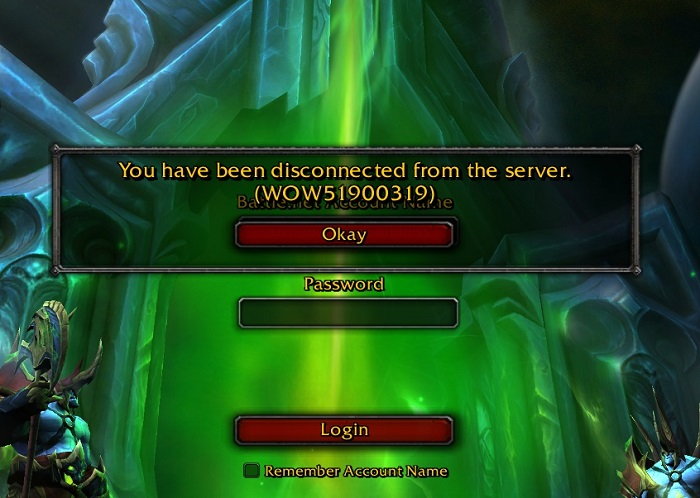 Reason 2 – Tightening up of Network Latency Requirements: Another possible speculation behind the error is that it can be caused due to Blizzard tightening up the network latency requirements. As a result, WOW Servers immediately disconnect when the network does not respond.

Reason 3 – Increased Graphics: Another possible reason is the increased graphics over each frame. As a result, when one plays WOW on high fps the internet connection is unable to keep up with the servers due to network latency and thus, it is disconnected.

In case the error is occurring due to Blizzard tightening up their network latency requirements, the WOW Servers will immediately disconnect when the network does not respond.

In this case, using an Ethernet cable is the best solution. Being a gamer, you know quite well about the efficiency and high speed of the Ethernet connections for gaming. Ethernet cables are bound to outperform Wi-Fi or LTE Connections of same bandwidth and speed.

Thus, Ethernet cables have less network latency and high speed which will cause fewer disconnections and non-responsiveness within the WOW servers.

Check for the error again. In case the error is still prevalent, try the next method to solve the ‘WOW51900319’ error.

The ‘WOW51900319’ error may be occurring due to a server lag specifically in your account. Although being a widely spread issue among the WOW gamers, the server lag could be hitting your particular account due to certain technical or software problems.

In this scenario, a simple Logout and Re-Login into your Battle.net account in World of Warcraft can solve the ‘WOW51900319’ error.

However, if the error still appears try the next method.

In case the WOW server of a specific region is affected, using a different VPN might help. The WOW server might be overload, particularly during peak times. As a result your World of Warcraft game will give the ‘WOW51900319’ error code.

Using a VPN of some other region fundamentally changes your location and thus your Server is different from the one you were previously using. If the method solves the error it is good enough. However, if the error still pops up try the next method.

One of the most popular and successful technique to resolve the ‘WOW51900319’ error issue is changing the background FPS to 30 fps. If you are facing the error only when WOW is switched to background , this is the most prominent solution.

Follow the steps given below to set background FPS to 30 fps in your game:

Step 3 – Then, click on ‘Advanced’ to go into the Advanced Options.

Step 4 – Now, find the option to ‘set Max Background FPS’ and check the box beside it.

Step 5 – After that the slider will be enabled. Use the slider and set the Max Background FPS to 30fps.

Restart the game again and check for the error. If the error still pops up, try the next method.

The increased graphics over each frame sometimes cause the‘WOW51900319’ error. As a result you are force to play WOW on high fps. In this case the internet connection is unable to keep up with servers due to network latency and thus disconnects. It can occur in medium or low fps rates too. Hence, you will need to lower the Foreground FPS Settings to fix the issue.

Follow the steps given below to lower the foreground FPS:

Step 3 – Then, click on ‘Advanced’ to go into the Advanced Options.

Step 4 – Now, find the option to ‘set Max Background FPS’ and check the box beside it.

Step 5 – After that the slider will be enabled. Use the slider and set the max foreground FPS lower than the current one.

Check for the error again. In case, the error message still pops up try the next method.

The ‘WOW51900319’ error may be occurring due to network latency issues. The error is most likely to pop up when the game is played over a tethered 4G LTE Connection. In this case, fixing the network within the game is the prominent solution.

Follow the steps given below to fix the network:

Step 3 – Then, find the ‘network options’ and click on it.

The network fix will help you hold a longer delay between such disconnections. The network latency of the game will not line up anymore.

If the error is still prevalent try the next method.

A standard set of procedures has mentioned by the Battle.net itself. The suggested technical fixes will help you cater with the ‘WOW51900319’ error and other such connection issues.

Whenever such an error message pops up, try checking the respective twitter handle @BlizzardCS first. You can also check the realm Status page for any game related issues that they may have posted.

They also ask you to visit the Technical Support Forums for any additional information and help that fellow forum users might provide. However, if nothing useful is found at the twitter handle or the realm status page, follow the steps on their Troubleshooting Connection and Latency Issues page.

Here are the technical fixes suggest by the Battle.net:

Try checking for any corruption or damage. Then, you should Reset the User Interface and make sure none of the add-ons or files are corrupt or damaged. Steps to reset the user interface are as follows:

Step 1 – First of all, close the World of Warcraft. Make sure that it is not running in the background.

Step 2 – After that Uninstall Your Add-on Managers to prevent removed add-ons from adding again.

Step 3 – Then, open the Blizzard Battle.net Application on your system.

Step 5 – Open the folder named World of Warcraft® and rename the folder as follows:

Step 6 – Then, launch the World of Warcraft® application again for the changes to take effect.

In case you are still encountering issues on Windows® OS, then you need to open Virtual Store Directory and delete specific files in it.follow the steps given below:

Step 1 – Command Windows to show the hidden folders and files.

Step 2 – Press the “Windows” Key and “R” together to open the run command dialogue box.

Step 4 – Now, open the folder named \Program Files and search and open another embedded folder named \World of Warcraft inside it.

Step 5 – Finally, Delete all the Cache, Interface and WTF folders inside it.

Step 6 – Restart Your Computer System for changes to take effect.

Step 7 – Try resetting the Network Devices like Router or Modem. It will make sure that they are not overload or malfunctioning.

Step 8 – Try updating all the Drivers to eliminate any compatibility problems.

Step 9 – Try to avoid any network conflicts. It can be achieved by renewing your IP and flushing your DNS.

Step 10 – Check if all other applications are close while World of Warcraft is running. It is possible that the RAM was clogging-up or any software conflict issue was occurring leading to the WOW51900319 error.

Step 11 – Make sure to check your Graphics Card and Network Card Driver settings to make sure they are up-to-date and as required by the game.

Step 12 – Disable any VPN service or any proxies that you were using.

Step 13 – Viruses or malware could be the reason behind the ‘WOW51900319’ error. So, run a full scan with your anti-virus software to check for viruses and malware.

Step 14 – Your anti-virus may be blocking the World of Warcraft from receiving any data from the servers causing the ‘WOW51900319’ error. You can try blocking or disabling the anti-virus.

Step 15 – Make sure to update the firmware on your router or modem.

Method 8: Uninstall-Install The Game On Your System

Proceed with this Method only if the other methods were unable to solve the WOW51900319 error. It is because there is a potential risk of losing part or all of your game data and progress.

Follow the steps given below to uninstall and reinstall the World of Warcraft:

Step 1 – First of all, Back-Up your Game data to Battle.net account and then uninstall your WOW game from your system. Clear all the residual or cache files.

Step 4 – Launch the application and Log Into your Battle.net to retrieve your game data.

In case none of the methods were able to fix the WOW51900319 error, contacting Blizzard Battle.net Support will surely help. Open a support ticket on Blizzard or Battle.net to gain some expert suggestions on the WOW51900319 error or any other problems with the World of Warcraft game. Anyhow, you will surely be able to solve the irritable error and enjoy your gaming again.

All You Need to Know About DCIM Folder and Images on...

IDP.Generic: What is IDP Generic, Is It a Infection?

Review of Seagate SeaTools for Windows